Dalèl Foundation was founded and is run by camel woman Joyce Schröder (1960), who has been closely involved with the Muzayna Bedouin since 1995.

Joyce lives with her five camels, Jamila, Subhan, Bilhèn, Abdèn and Dalèle, most part of the year among the Bedouins in Dahab.

In addition to the Dalèl Foundation, she is also the face of DesertJoy, a small scaled ecotourism travelagency in which she organizes and guides nomadic desert treks by camel through the desert of South Sinai together with the Muzayna Bedouins: www.desertjoy.nl 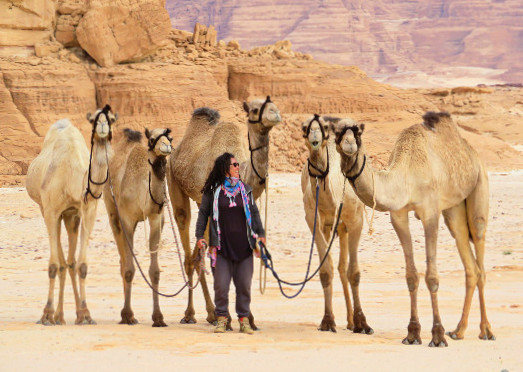 Her first camel Dalèl, with whom everything started …

More about her camels

When my first camel, Dalèl (bull), after having been together for 8 years, died on 8 February 2006, I received on the first treks without him much consolation from the rest of the herd and from each camel individually and each in its own way.

Everything started with Dalèl, that he was special I already knew during his life, but only after he died did I realized how special he was. He is still my inspirator and guide.

I will never forget the consolation of the herd and of each individual.
It was because of this that after Dalèl died I became much more aware of the other camels and that’s how I wanted to mean more to these special animals.

I walked around with this wish for a year and a half, until on August 1, 2007 my second camel Aweida (female) died.

Two days after her death something special happened, it seemed as if they were both in the room, as if something larger filled the room and I was being carried. Then suddenly the mission and goals flowed out of my pen and my wish finally became concrete.

That’s how on 11 September 2007 the Dalèl Foundation was finally a fact at the notary.

And that’s why the Foundation carries the name of Dalèl and that the logo is the image of Aweida.

His role and qualities:
Musa is a good executor and keeps a cool head in the event of an emergency. He has a great knowledge of the Bedouin community, is good at tracing and gives advice to the foundation about situations of families or camel owners when in doubt.

Musa also arranges the purchase of feed for the adoption camels together with the foundation or commissioned by the Dalèl Foundation.

Musa is especially open to changes with regard to caring for and dealing with camels as a result of changing lives, and he is also eager to learn the knowledge that is still alive with old (er) Bedouins, such as Aliyèn and Subaih, about camel treatment according to bedouin methods.

In the beginning, Musa was also the only one who was open to castration for camel bulls when not used for reproduction, this ensured that the foundation started the castration / gelding project!

Musa lives with his family and his 3 camels in Dahab.

Muzayni bedouin from the Hedai clan, works for more than 40 years with camels.

Aliyèn has a great knowledge of camels, in particular about symptoms and the associated pressure points.

He was born in the desert and has traveled his entire life with their herds through the Sinai desert. He is a passionate Desert & Camel man.

Nowadays he lives parts of the year in Dahab and is the direct neighbor of the Dalèl Foundation in Dahab.

The Hajj deserves special mention. He was widely known as “the camel doctor” and was called from far to come to sick camels. The last years of his life he lived in Dahab with his son Aliyèn, where he died on July 3, 2008, in old age.

The Hajj “read” a camel, as it were, at a glance he did. He meant a lot to camels, not only in the case of illness but also in the so-called “unmanageable” behavior of a camel.

For example, he also helped Jamila who was neglected when Joyce rescued her.

The Hajj has spent his entire life among camels and has transferred much of his knowledge to his son Aliyèn, who is now taking his place.